Don Pedro on How He Includes Live Instruments into His Beats 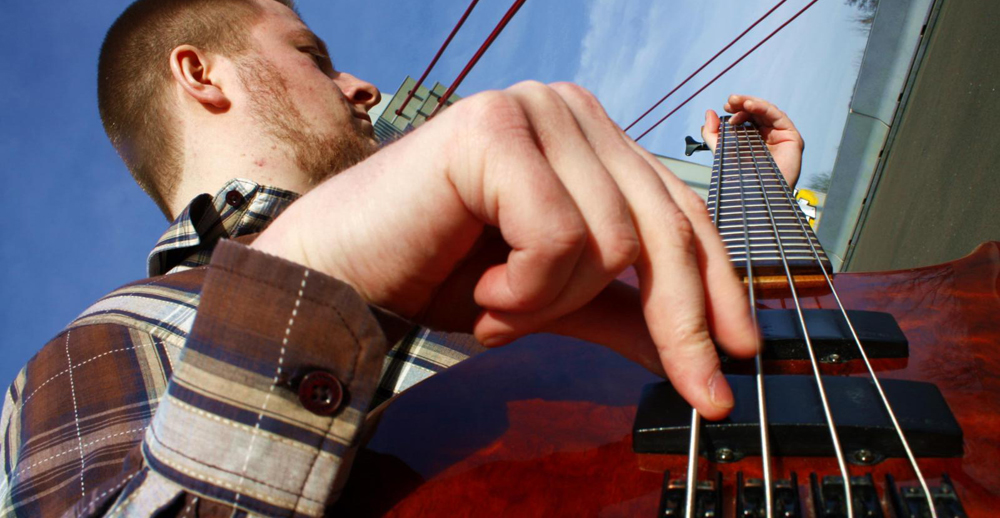 Using the Skull Snaps breaks pretty much guarantees that you will create a dope beat. In this case, Don Pedro claimed the Beat This! title, but also added his unique style to it, thanks to his years of playing instruments. Here's what he had to say...

So you won the Beat This! Competition when we had the Skull Snaps breakbeat as the theme. How did you put together that beat?

On the first day I'm just being creative, going for the atmosphere and groove, creating the vibe and record rough ideas.

I make the beat a little bit more pumping by adding a kick, snare and hi-hat. Then I take an old song and cut very little snippets (about 40 on this track) out and lay them on the MIDI keyboard in order to play them.

After a while there were about 6 new combinations of them on which I decide what is more - a chorus or a verse. Song arrangement is mostly classic at first with 8-bar hooks and 16-bar verses.

Now comes the best part where I take my bass and other instruments to record some rough new ideas.

On the second day (there has to be a break at that point) I record everything again but this time on point and final. Third day is only mixing, fourth day finally is only mastering.

The whole song was made on hi-fi headphones (Sony CD-380), I know them very well.

When I record something to something that is already there (e.g. the bass over the beat), I have to rough mix it before as good as possible, because that influences me how to record it.

There was a time when I said "NOW I mix everything from 0% to 100%". It essentially killed the whole song/vibe that i was used to. If you listen 500 times to a little part, every change to that part seems to be wrong after a while.

Upon listening to that beat I could tell your bassline was on point and busy. Then I noticed you're a bass player. Tell us more.

Playing live bass with a band will always be my main music thing I think. Most of the time I play my own composed songs in genres like "Funk/Rock/Progressive". It has to have a groove.

That's what I like about Hip Hop - it's a combination of groovy real instruments and electronic-produced music on the computer. You also have big musical freedom in this genre.

I always find it interesting with a Hip Hop producer or beatmaker plays an instrument. Are there other instruments that you play?

My first instrument was the piano where I took some years of classical training years ago but I'm now using the skills only to handle the MIDI keyboard to play synths, organs or cutted samples.

Then came the bass and third instrument now is the guitar (electric).

Do the live instruments play a big part in how you craft your beats? Or do they just compliment what you've done?

I usually structure a beat like I would do it with a live band. It contains only a few tracks (busses) like beat, bass, guitar, pads and chopped samples.

Your beats seem to have a 90's influence on them. What are your musical influences?

I'm generally more into older music. If it sounds good, it's good.

I'm not at all into something like Trap with their 32nd note hi-hats (that's a big "nono" for me haha ) or big epic Rap beats with choirs.

Most of the influences come from my family of course where many play an instrument. Nobody hears chart music etc.

I noticed that you're also involved with electronic music. Is it EDM?

I produced a lot (at least I tried) House music (French House). I love those pumping Disco basslines.

What do you currently have in your studio setup?

Most of the equipment are classics, there is nearly no "boutique" stuff. I like stuff that was used for 30+ years. There is a reason for that and it works.

Here is a little list of these things:
Obviously your bass guitar is a big part of your setup, but what else can you not live without?

I honestly think it's YouTube. There is so much music to discover and great things to learn (for music production etc.)

Equipment-wise it would be Ableton. I used that for so many years now with an incredible workflow that no other DAW has.

Why did you get into beatmaking?

I always was interested in computers, so I combined that with music. The first "DAWs" were Ejay, Music Maker 7 and Fruity Loops 9 (for the first Hip Hop beats)

I can do it on my own whenever I want. I don't have to meet with other people on a certain day and say "now we have to be creative during the next 2 hours".
You can noodle around on an instrument for 30 minutes or you can have the same outcome within 3 minutes if you are really in the mood to make music. The quick "accessibility" is key.

What projects are you working on right now?

I recently built my home studio, reading a LOT about room acoustics and classical mixing and I also measured my room sound on my own.

What kind of advice do you have for other beatmakers reading this?

Get the basics covered before you try something special. Become a master in using the compressor, EQ, reverb and delay.

Use less (equipment, plugins, musical variations etc.) and totally own these few tools like no one else.

Be open-minded in terms of music and production. Be very self-critique in order to improve, compare yourself only to the best. Do your own thing!

Thanks for doing the interview. Any shoutouts you'd like to give?

I would like to give a shoutout to my band mates and the friends that I send my unpublished music to have a first listen and comment on it.

They have the luxury of not being involved in the production world and are able to give really simple and good feedback.