Most expensive beat sold ever!!!

I just read a danish article stating that Nas and Diddy have been in a bidding war over a Neptunes beat that ended by Nas taking the beat home for the small sum of $2.000.000. Neptunes are normally not cheap, but this sounds ridiculous.

Busta Rhymes, who has heard it, said the following about the beat, "Ah shit, thats the craziest beat, I ever heard! Those drums man, Those drums are fire! If Nas is gonna rap to this beat, its going to be over. This will be the biggest hit in the history of hiphop!"

The song will be part of his coming album, NasDaq Dow Jones.

Don't know if it really is completely true or not, and don't want be the one spreading rumours, but let's say it's true...what's your opinions, reactions, thoughts?

UPDATE: Just found an English article on the subject (of cour after i had translated everything)
http://www.bayridaz.com/wca/modules.php?name=News&file=article&sid=1947

*** ill o.g. ***
I think all of that rumours the label put out to already promote what is coming. Dont really believe it.
"DONT ASK ME FOR SHIT YOU DUMB MUTHA FUCKA!! YALL AINT NOTHIN BUT FUCKIN GROUPIES. GET FUCKIN REAL FOR A CHANGE YOU BASTARDS"

"Honestly I REALLY could go on forever on this, the fuckers can NOT drive either, at the start of EVERY traffic jam here is a dumb fuck with a SC plate too."

*** ill o.g. ***
Interesting, but shit, for 2 million, you can get a top notch album from just about any producer in the game. I don't know if I believe it but if its true, I'm eager to hear that shit!!
DJ Swivel
http://www.djswivel.com
http://www.myspace.com/djswivelmusic

*** ill o.g. ***
Battle Points: 3
Yeah, I read that awhile back somewhere else. I just think that it's some hype to create a buzz for the new album. If there was really a bidding war; then I don't think that Nas could outbid P-Diddy if it was something that Diddy really wanted. But; who knows?? Like I said before I think it's just hype.
ONE
"Flip it enough? Flip these. Flip off. Go flip some fucking burgers.." Kno[SIGPIC][/SIGPIC]

*** ill o.g. ***
It's a publicity stunt, kinda like when Funk Flex refused to play Piggybank, it only built the anticipation even more. Nas will do his numbers but his career is declining and the Neptunes won't change that.
Go Digital or Go Home
Twitter:http://www.twitter.com/mrshadeed
YouTube: http://www.youtube.com/mrshadeed
http://mrshadeed.com
L

*** ill o.g. ***
I love nas but that sounds like 100% bullshit. I dont think ive heard anybody speak that highly on a single beat since shook ones. It could be a stunt. Especially since they include the album title in it.
S

Truth is Hate Me Now was a track that was produced by "Puff Daddy." You producers out there should know Hate Me Now doesn't doesn't sound like or include any of the classic Neptunes techniques. If the Neptunes (Pharrell) did it, the track would've been alot hotter than it was.

*** ill o.g. ***
Battle Points: 182
bthis!
bthat!
purely marketing... and it will work obviously.. cause we all are curious to hear it now.
PRODUCERGAL'S INSTAGRAM

berserk said:
yeah but what the fuck is Svenghali referring to?
Click to expand...

What part didn't you understand?
C

I am sorry Svenghali, but I do not understand you either.

Anyway, I was thinking it may be a rumour too, but if the track isn't really, really special, I am unsure whether The Neptunes would let their name be part of the rumour, as it would give them a minus. Both Nas and Diddy would also look stupid if they had had a bidding war over a beat that isn't the ultimate bomb. Just thoughts that make make not wanting to completely put the story aside as a rumour.

*** ill o.g. ***
Battle Points: 33
you're talking about hate me now being produced by the neptunes, no-one said anything along those lines
KEEP THEM CAKES BUBBLING YO!!!

*** ill o.g. ***
i think Svenghali is tryin to say he thinks Neptunes ghost-produced Hate Me Now... but in the booklet it says P.Diddy neway...
.:Rhythmikal:. (Pronounced 'RITH-MIK-AL')

''You have as much chance winning the lottery as you do making it big, but unlike the lottery, that chance is self controllable.''

Myspace - Check out my page

*** ill o.g. ***
Battle Points: 56
bthis!
Hell yeah, i know i def want to hear it, I bet it is fire though. Can't wait to see when it comes out.
I Make Music From The Soul
Be Comfortable with being Uncomfortable
www.Soundcloud.com/MrMartinMusic
www.BeatsByMartin.com
www.HighOnClothing.com
S

For those that were confused I apologize. My post was confusing to say the least.

Rhythmikal
Thanks for trying to make sense from what I was saying.

Bezerk
You're right, no one mentioned anything about hate me now, my bad. I just assumed that Cope was referring to "Hate Me Now" since Diddy and Nas did that track together. Too much of that purple H. But why you droppin' " F" bombs? Shit ain't neccessary, what you hardcore or something?

Copenhagen
The problem with this rumor is that Nas doesn't have the kind of budget that would allow him to get into a bidding war with Diddy. Even if there was a bidding war $2.000.000 is not even economically feasible. No A&R here in the states would sign off on something like that. Even with the kind of money that Diddy's sitting on, I find it hard to believe that (as a business man) he would invest that kind of money into a track. With a track it's not a sure shot investment, too much of a gamble. Besides, top level urban music producers are not getting it like that. Guys like Timbalnd, Kanye and the Neptunes on average are getting between like 150,000.00 a track. When they work with pop superstars like Mariah Carey and Britney (artists that have megabudgets) you can tack on another $150,000 - $250,000 on top of that.

thats was prob the best response you couldve had

*** ill o.g. ***
Battle Points: 1
yea i heard about this last weekend, if its true, that beat must be fuckin amazing
The MPC-60 is rare, but it still sound cripsy
Kicks and snares take 'em from elsewhere, samples is hard to find. We don't just act divine, we are
We walkin upright, you lack spine
I don't just write rhymes
I send force through pipelines to like minds

www.myspace.com/timdtheshogun
You must log in or register to reply here. 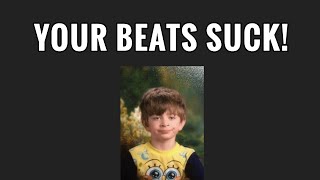