Production Retro Gear: A Look Back At The Alesis ADAT

In January of 1991, Alesis announced at the annual NAMM convention that they were about to release a new product to the recording market, the ADAT. In early 1992, they finally delivered on that promise and released the first model of their digital audio recorder, and it quickly became a huge boost for audio engineers, producers, and beat makers alike.

I first heard about the ADAT (Alesis Digital Audio Tape) in late 1992 and didn't get to actually touch one until late 1993 at a recording studio, where they had eight of them synched together! I was blown away because all of it seemed like something that was about to revolutionize audio recording. At first I thought it would be great if I could get my hands on an ADAT for my home studio, but the introductory price of $3,995 was way over my budget. Nevertheless, it was a great machine when I first touched it, and it still is today - since it's still being used.

Up until this point, there was nothing else on the market that was able to have the sample accuracy of the ADAT, so when Alesis dropped this on the masses, it was a blessing. The reason why sample accuracy was such a big thing is simply because that's the only way you could really take advantage of this machine and have it synched up to many other ADATs. Alesis went above and beyond by allowing users to sync up to 16 machines together, which would give you a total of 128 tracks to play with.

The ADAT used Super VHS tape, that is commonly used by VCRs, and each tape could hold up to 8 tracks. This was another thing that attracted me to the ADAT so much because being able to use VHS tapes to record music? Mind blown.

What made it great

There are three things that I think made the ADAT great, mainly because of the time period. The first, is that it had "locate points". This allowed you to store exact sample positions on tape so you could easily go back to that point later on! This was all possible of course, because it was digital recordings. Up until that point, you had to basically go back and forth through your tape to find your spots.

The second, is that since it was digital recordings, it was much easier to punch in and out since it had Auto Play and Auto Record. This enabled you to record over a spot that you messed up, rather than the old way of doing it manually and having a much greater chance of making even more mistakes.

The third thing that I really liked about the ADAT system was the BRC (Big Remote Control). I never used the LRC (Little Remote Control), but the BRC was simply great. It had lots of controls so you could control the entire ADAT system from there, punch in and out easily, and do whatever else needed to be done. It was great having this big remote control just sitting there as the center of the recording process.

As of this writing, the ADAT is of course, considered obsolete. There are some studios that still use it of course, just as they use 2-inch tape, for example, but pretty much no one is using it because it's tape. There are only a few companies that still make tapes, so it can be costly if you still want to have an ADAT system.

What Alesis has done though is changed with the times and the ADAT is now the ADAT HD24, which is a 24-track hard-disk audio recorder. It looks similar to the original ADAT but it functions quite differently.

*** ill o.g. ***
I recorded my first demos in '92 and 93 on ADAT. I really think the single biggest draw to it was the ability to record at CD quality for cheap (relatively speaking), and that it's modular. You can buy as many as you can afford and link them together in a matter of minutes. In fact, the project studio I was recording out of started with one ADAT and expanded to three over time. Also, you could route the inputs to each track at will, so if something was wrong with your mixers busses, you could still record, one track at a time, across all 8 tracks.

*** ill o.g. ***
Battle Points: 21
bthis!
yup, this was a game-changer when it came out. We were finally in the studio with 24 tracks. It blew my mind.
Drunk Pedestrians - Web
Bleeding Peanutbutter - Blog
Twitter

*** ill o.g. ***
The OG setup in damned near everybody's studio was three ADATs and a 24 channel Mackie 8-Bus console. Less common was one of Tascam's 8bus joints like the M2600 (which I loved). Cheap spots would cop those Berhinger rip-offs of the Mackies.

konceptG said:
The OG setup in damned near everybody's studio was three ADATs and a 24 channel Mackie 8-Bus console. Less common was one of Tascam's 8bus joints like the M2600 (which I loved). Cheap spots would cop those Berhinger rip-offs of the Mackies.
Click to expand...

I SO wanted an Mackie 8-bus back then, based on the looks alone lol. But when I saw the ADAT and the punch-ins I was amazed. 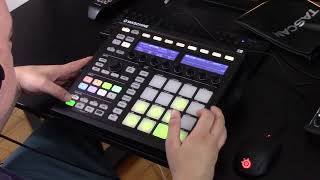