Interviews Take a Marvelous Adventure with the Wayback Machine

​
"The Marvelous Adventures of the Wayback Machine". When I first heard about this project, I didn't know what to expect, except that it was going to be different. To see that thedreampolice and Lord Lav have teamed is odd enough, given that their styles seem far apart. On one hand thedreampolice along with his Drunk Pedestrians group manage to bridge the gap between Hip Hop and a live band. Then there's Lord Lav. Zombie killer/lover.

As it turns out, "The Marvelous Adventures...." takes the listener on a journey through various time periods and what the music was or probably was like. I wasn't around in 1889 so I don't know what kind of music people were nodding their head to in El Paso, or even in 1920 in the Mississippi Delta. I do know the 80's, and on the track "Miami", they nailed.

What we have here is an EP where all the beats were done by thedreampolice and Lord Lav complementing it with his vocals. I asked the two of them a few questions about this project, and this is what they had to say...

So thedreampolice and Lord Lav have teamed up for some weird time travel beats and lyrics. What's this EP all about?

DP: The EP is a wild adventure through time and space were we have to gig in each time period. It just a bizarre concept album. See the story here.

LL: Basically it's a crazy concept EP about me and the Drunk Pedestrians time travelling through different places throughout the world during different times in history (and the future).

I'm used to Lord Lav doing zombie stuff. Did zombies learn how to operate a Stargate or something?

DP: No, Lord Lav fought off all the zombies then left his time with his TARDIEST PORT-A-LOO time machine.

LL: Haha! I like to play around with different concepts to tell a story. Being in a zombie apocalypse as in my first album 'Lord of the Dead' was just one way of doing that. But I'm in no way tied to just doing 'zombie rap'. There are tons of other ideas and concepts I want to utilise in music and time travel is just another fun way of doing it. Besides I used to be obsessed with the idea of time travel as a nipper. I used to write stories about it and shit. I loved the Back to the Future films as a kid. So when Chris hit me up and said 'Do you want to do this crazy idea I have for a rap album about time travel' I was like 'Er… FUCK YEAH!'

You've completed the EP and also have done some video work which looks great. Who does what in this project?

DP: I did all the production and mixing/mastering. Lav wrote and performed all the vocals. His friend Rob did the Delta video and Lav and I did the Miami video.

LL: Thanks! Chris made all the beats and did all the engineering. He did the Miami video as well. I basically did all the lyrics, cuts and scratches on the album. Up to now I've basically done everything myself so it's been fun to collaborate on this project and be able to take a backseat when it comes to beats, etc and just focus on rapping. The Delta video was done by a good mate of mine Rob Luckins who's an absolute don when it comes to music videos, photography and artwork. He also did the album cover too.


My favorite track is Miami 1986 (probably because the 80's were the best). What's the basis of that track?

DP: I think that is my favorite song as well, it started as just a fun throw back gangsterish song but Lav really took to it and made it a semi serious and political. Even though this EP is more about fun and adventure and just weird as a whole, I like that he dropped in political commentary about the 80's drug wars and the failure of the "war on drugs" as a whole. And I like how he incorporated him and I getting caught in a gang police shootout. Lav is such a great lyricist my favorite line of the album is (on the song Mississippi Delta) "Rap tells you to fly when you ain't no pilot, Blues knows you will die and gives you rye to hide it".

LL: Chris handed me the track and I immediately thought it sounded like one of those 80s shows like 'Air Wolf' or something. So that lead me to think about the 80s in general. The 80s as a decade has arguably had the biggest affect on all of us throughout the world with the development of Neoliberalism, etc and I think the way Miami developed throughout the 80s was the best way of explaining that idea.

What are you guys planning to do with this project?

DP: We are going to try and do about a 15 show tour (10 US, 5 UK shows) in 2017 and then we want to put out a vinyl collectors edition with extras like the story and all the postcards etc. In mid 2017 the next full Drunk Pedestrians record comes out and I am hoping Lav will join me for that tour as well. Then we plan on doing a part two EP with more time periods and adventures.

LL: Basically get it out there so as many people hear it as possible and then tour off the back of it in both the US and the UK. We'd like to come over to Canada too Fade if you fancy having us? Just make sure you bring plenty of beer, maple syrup and accommodating Canadian women. I'll sort things out from there

"The Marvelous Adventures of the Wayback Machine" drops on November 4th. Keep an eye on the countdown clock on IllMuzik! 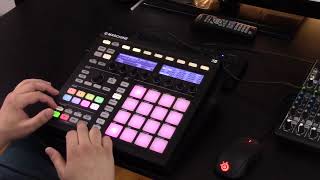