Interviews Telling Stories with His Beats Is What He Does

Recently winning the Beat This! Competition where there wasn't a theme, Storytime Beats topped the rest in a close battle. With a solid studio setup and great techniques to how he puts together his beats, he explains even further what does down when he's creating.

Congratulations on your Beat This! win. How did you put together the winning beat?

Thanks! I was quite surprised to win actually. None of my beats are produced with the intention for beat battles. I edited the original to fit within the 2 minute rule (a new challenge for me and a good one too) The beat uses VST's and modified sounds from NI komplete 8 and BFD. It's designed for a vocalist but I also wanted it to stand alone. To achieve this, I focused on dynamics throughout the transitions of the track. The progressive string section and addition of live drums in the pre chorus were the key to achieving this.

You started making beats in 2012, so what kind of setup do you have?

As with most of us, it's forever evolving. Although, Cubase 5 is my go to DAW.

There are a lot of beatmakers that just want to sell beats, but you're aiming more to work with artists, correct?

Selling beats is something I'm yet to dive into properly. My musical background has always involved writing and playing with other musicians, one thing I learnt was "one person's weakness is another's strength" now that I've moved to producing entire tracks on my own, I still want to keep elements of collaboration within the music (and for my sanity :eek. Also, I currently don't have a reputation as a beatmaker/producer, unlike I did as a live drummer.

Overall, I think building relationships and working with other artist is a win for both parties, it inevitably leads to better creative music and a continuous network of like-minded people.

What was it that got you into music production?

I began programming drum parts to experiment and discover new ideas I wouldn't normally create as a conventional drummer, from there, I was hooked! I also began to record live guitars, bass and vocals to demo material before going into a real studio. It was a great way to learn about pre-production and the basic elements of the producer, engineer and mix engineer. They're all a unique skill set and bottomless pit of knowledge! o_O

I noticed that you're a fan of various music genres, tell us more about that.

By playing with a variety of musicians I discovered artists and genres outside of my small world. Beastie Boys and Scarface drew me into the diverse world of Hip Hop and Rap, and likewise, Rage Against The Machine and Tool pulled me towards heavier and unique melodic sounds.

I've always enjoyed playing the acoustic guitar, which is widely used across many genres and although I rarely use it in my final productions, the melody or chord progression often begins with experimenting on the acoustic. With a wide selection of influences, it helps me keep the inspiration and creative bug alive.

Your beats are very solid but all have a smooth polish on top, how do you do it?

Thank you, that's a great compliment. I think we all know sound selection is a crucial element to a good beat. Therefore, it's one of the things I spend a lot of time on. Once I have the basic groove, chord progressions and melodies, I work on the drum and bass section. I preview different sounds, edit or sculpt them adjusting EQ and compression until I feel they work together. Then, I often sidechain the bass to the kick pattern to help separate the attack of the kick from the bass. This is usually a subtle setting compared to the more noticeable Club or House genre method. However, I do enjoy using a good old ducking effect for transitions and to create more space at the low end.

When layering the mid and high frequency sounds I generally remove a lot of low end or at least dip down a few db where I hear them competing with other sounds. Subtle EQ and compression is our friend.

I use delays, reverb and automation to help give my tracks a sense of space and that extra something. One trick I do is use a universal reverb on a few main instruments and then adjust the amount sent to each one, this (done subtlety) can help the instruments gel together.

Another tip is to use a reference track when mixing. By using a familiar song from a similar genre that I know sounds good on a variety of speakers, helps me to hear how my mix is coming along. Having said that, I still find mixing to be the most difficult and challenging part of beat making. It's an endless learning curve.

What was the best experience you ever had while making beats?

To be completely honest, it was when I finished my first complete beat (it wasn't even good!) For 2 years, all I did was compose 8 and 16 bar loops that went know where! I was creating alone for the first time and my discipline went out the window. Although, in hindsight, I was learning to use the computer as a musical instrument to bring my ideas to life. From the moment I completed that first (very average beat) I decided to take beat making seriously, I began forcing myself to complete tracks, even if they didn't turn out that good. I know this might sound like I was wasting time on wack beats, however, that's when I noticed myself improve to the next level, and by that I mean, create beats I believed were good enough to show others. ILLMUZIK has been a big part of that process. I was so excited to take out the Platinum spot in the May Warzone Beat Battle! that was the first time uploading my music to a community like this one. It felt very rewarding.

Why the name Storytime Beats?

"Storytime" refers to the artist and "Beats" refers to me. I didn't want a name just about myself. Also, I use the phrase "What's Your Story?" in my website header to highlight this aspect. I want the artist to feel like they can come to me for more than just a beat but a collaboration too. I like artists who deliver a good honest story within a song and therefore I created a name to resemble this. Another way to explain the meaning behind the name is, I believe we all have a story worth sharing.

If you had the chance to buy $5000 worth of recording gear, what would you get?

Honestly, I think I'd pay myself not go to work for a couple of months and dedicate that time to improving my production skills and composing music in the man cave. However, the new Dave Smith Prophet 12 would be a nice addition to the family.

Do you have any upcoming projects that we can look forward to?

My first release as a collaborative producer is due out early 2016 under the name "Missing Penny" (A collaboration of Storytime Beats and vocalist Rebekah Davis). The songs are melancholy in nature with hints of light. Look out for this at https://soundcloud.com/missing-penny

Also, I'm building my own website which currently host a small selection of instrumentals. The official launch is planned for February 2016. The majority of 2015 has been dedicated to producing a catalogue of quality instrumentals soon to be available at www.storytimebeats.com

Thanks for doing the interview. Do you have any shoutouts you'd like to give?

Most definitely the crew behind ILLMUZIK! I'm also very fortunate to have a beautiful lady in my life, providing very honest feedback about my music. Letting me know when a spade is a spade (aka - you're trying to polish a turd!). Love you Sweets 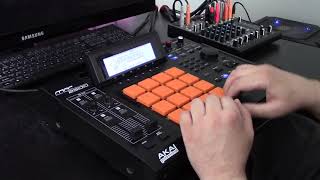