Rezzy said:
i got thick skin.. LOL i already know my flaws

@Rezzy yo man, thanks for the feedback. I like that breakdown/bridge you have going on there.
I'm not sure if the vocals at the beginning match though.
I like the classic drum sounds you used. nice tempo too.

I posted another "FLIP" attempt...check it out. Merry Christmas.
K

Battle Points: 8
I'll give my feedback on all the submissions the next time I log in. Peace to all my illiens

Battle Points: 8
@oninkaf - nice chill vibe. I like the horn and string fillers and the clever use of panning both. I'm a HUGE fan of panning
What I disliked about this beat are the overpowering hats/tambourines and the bassline level is too low. IMO, hats should be buried underneath the kick and the snare...more of a metronome sound. Just my personal preference/opinion though. Props!

@Klypse - I like the drums in this track. The transition is also nice, although the mix levels are off. I feel this needs work in the overall mixing of the beat, and the horn section after the piano chops would have sounded better in stereo to give it a fuller sound. The bassline mix should sit under the kick, so the kick stands out more. Overall, not bad.

@Edgar - First off, I love how you chose a different section of the song to sample, and went to town with it...props for that! The elements of this beat are amazing, and the mood of the beat flows. Again, NOT a huge fan of hats louder than the kick and snare or the bass drowning the kick. Other than that, this beat is nice!

@S3oulC1ty - Bruh, you are KILLING it with the soul in your beats! I love how you programmed the samples into a synth and played them that way. Hats should have been lower, and of course, the bassline is nice, but could be mixed better. Props yo!

@ProjktNorthWind - I also love how you used a different section to sample...although I'm unsure which direction you were going with the first attempt beat. The drums seem stale with no life whatsoever. Some panning to the left would have made the beat sound fuller, instead of keeping that flute fully panned to the right. The mood is consistent, but lacking in the drum dept.

@Rezzy - That intro was dope, especially since it wasn't the obvious piano loop. Honestly, the breakbeat killed it for me, since I'm not too fond of breakbeats over being creative in drum sequencing. The bassline mix was too overpowering imo.

@ProjktNorthWind - Your second attempt sounded way better than the first, although the drums in the beginning sounded weak...but when that transition hits, you more than make up for it! Props! I like how the mix sounds a lot fuller this time around, which means you really paid attention to panning and mixing this time around. The overall mood still confuses me, but it's what makes you you, so props for that!

Overall, props to everyone who took a stab at this sample flip. The re-occuring problems I see (as a sound engineer) are the weak drums (in terms of attack/velocity), overall mixing/panning, and the overkill on the basslines. My recommendation to everyone is to mix your levels at a low volume, and it wouldn't hurt to have a second pair of ears to help you mix what you may overlook. I'm more than happy to assist you with my ears, in order to improve your overall mixes. Let me know. 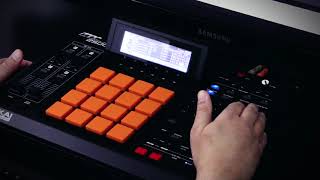