What do you focus on when making drums?


For me it's the groove because I always start with drums, a dry track then work my way up from there. Later on I'll tweak it to my liking in order to make it blend well with the rest of the track.

*** ill o.g. ***
Battle Points: 20
bthis!
groove definitely, i usually start off with chopping and rearranging a break, and then add some instrument sample chops (with comp) and see where that takes me. next come some drum layers to make the drum sound fit the sample.
i used to heavily compress drum sounds from the beginning but then i realized compression won't make wack drums sound good.
"Hip Hop is not dead, it just got drunk and shat its pants in front of everybody."

First its the groove and pattern, then I tweak them to fit whats going on within the song (velocities and the placements of the hits). Making them sound good with eq & compression/limiting is last.


For me it's the groove because I always start with drums, a dry track then work my way up from there. Later on I'll tweak it to my liking in order to make it blend well with the rest of the track.

After the rest of channels are assigned and active ill look back at the drums in order accentuate the things id like to see sticking out in the mix. Like a snare often dissappears in mid/high, so i add a wee bit of reso so that i comes to the front. Sometimes ill add a gate to the drum bus to keep some headroom so that other instruments get more attention/detail.
" I'm in your tv, you look stupid in your livingroom..."

Formant (n)
One who brings meaning, form, shape.
One that limits, determines or defines.
Click to expand...

Its a fucking conspiracy!

Moderator
*** ill o.g. ***
Battle Points: 436
bthis!
war
bfights!
aotb!
I mainly just try and fit the melody to the drums or vice versa, I dont generally use compression on drums anymore but maybe I should re-introduce it.
I can start with either melody or drums, but I always try to get everything to meld together well. I also try and get it so that if I drop to just drums alone then they dont sound weak and boring on their own, with a nice bang and groove.
Soundcloud: http://soundcloud.com/2good-productions
Youtube: https://www.youtube.com/channel/UC9nHOKvfQusOfoUYKYh25mA

*** ill o.g. ***
^^^ depends on ofc, not compressing drums is suiting when you use sample drums/chops. I often use clean drums, dry of anything. Chopped drumbreaks are already mastered, best way to go around to make those sound good is just leveling, your own mastering chain always fixes the rest.
" I'm in your tv, you look stupid in your livingroom..."

Formant (n)
One who brings meaning, form, shape.
One that limits, determines or defines.
Click to expand...

*** ill o.g. ***
Battle Points: 33
bthis!
In my productions drums are one of the most important elements, if not the most important besides the vocals that will be recorded later...because of this, I often spend a lot of time getting my drums to sound just right. Whether it be sample selection, tuning, or groove - they all play a massive roll in getting my drum tracks to bang right.

When starting a beat, I dont worry too much about the mix or the effects that I use, (even dynamic processing isnt a concern at this stage, unless I simply need to bring up the relative level of my drums in order to even hear them correctly while i sequence)...

At this point, its all about bringing a concept into reality and creating something to build off of. This often changes later as well once the song begins to take form.

(1) So first thing I focus on I suppose would be drum selection.
The drums need to always appropriately accompany the mood, the sample, the instrument choices, etc. Ive found that if I fall short in that area, then the rest of the song doesnt come together as it should usually.

(2) Next, its on to sequencing. I lace up the basic kick snare hat structure so that I have a basic building block. (Note: I usually build my drums around a main sample or melody line since I find my songs to be more cohesive that way and not like two different instruments are fighting for attention in the mix, ie. drums vs sample)

(3) Once a basic pattern is working, I focus primarily on groove. I asses whether or not I like how the groove feels and if I need to re-record it now to offer a different swing, etc. Sometimes its just a matter of time shifting, I often find its better to just re-record the sequence though to capture the real feel Im after.

(4) Next I lace up my percussion. Im really big on percussion so I always like to add an entirely new layer of percussive sounds to help amend the track in a way that another instrument would basically.

(5) At this point the drums are typically done minus some sequence swapping and mute automation's...

(6) Since I sequence on the MPC, I dont bother using effects usually until I track into my DAW. So things like compression usually dont come into play until I have everything tracked out and Im at the stage where Im ready to mix the entire beat down. (I have been using a mild ratio of compression from the MPC lately however in order to just clamp down on the transients peaks a little to help tame some of the spikes and make the conversion into the computer go a little more smoothly.)

*** ill o.g. ***
Battle Points: 83
bthis!
I focus on my wallet cuz I buy them from the best...
Then I stack them. muhahahahahaha
I SMECK errrBODY..........
CHECK OUT THE HOTTEST ARTISTS IN THE CAROLINA'S ON ILLMUZIK RADIO NOW!!! Click here!
Relic@Illmuzik

http://soundcloud.com/1sto1978
- Consult not your fears but rather your hopes and dreams.

I basically spend alot of time digging for breaks and chopping up drum sounds. Then I spend time layering them and seeing what sounds the best with the melody. Ill play with the volumes and pan stuff. Then I focus on the drum pattern itself and getting the groove down. I think all the things you mentioned are equally imp in making dope drums.

*** ill o.g. ***
Battle Points: 138
bfights!
aotb!
biu!
I focus on the tone and velocity then I'll just arrange sample chops/compositions around my drums (or vice versa). Then I might filter my drums and add parametric EQ to get the right "feel". At the end I'll compress the drums just to get them to "sit" right in the mix.
http://reachingforlucidity.net/category/skidmatik-music/

Its a fucking conspiracy!

jrbeats5 said:
I basically spend alot of time digging for breaks and chopping up drum sounds. Then I spend time layering them and seeing what sounds the best with the melody. Ill play with the volumes and pan stuff. Then I focus on the drum pattern itself and getting the groove down. I think all the things you mentioned are equally imp in making dope drums.
Click to expand...

You bring up a good point about panning, sometimes panning can make all the difference, especially with hi hats and percussion sounds like congas for example.
Soundcloud: http://soundcloud.com/2good-productions
Youtube: https://www.youtube.com/channel/UC9nHOKvfQusOfoUYKYh25mA
M

*** ill o.g. ***
Battle Points: 1
first thing I do with my drums, I make them sound the way I want them to. So I tweak em first then rearrange accordingly to the sample/arrangement I have going on

*** ill o.g. ***
Battle Points: 303
bthis!
aotb!
bthat!
First I go through all the drums and listen to all of them while the sample loop/chop/melody is playing...once I find the right sounding drum...I add it...then I repeat for another drum if the one I have needs more.....And this goes for kicks and snares. If I have to move it up or down on the piano roll to get the right sound, I do that as well...

Then I focus on the actual groove/sequence of the drums to get the perfect groove with the rest of the sample loop/chop melody...Once I get that right:

Then I adjust the volumes of the layered drums to get the right part to come out and not get any unnecessary sound......

Then I EQ the drums to get them to sound perfect, then compression to give them that punch/snap...
"Producer, beatmaker. Whatever you call it. Music is the product. Titles are irrelevant." - Sucio
The "death" of hip-hop coincides with the success of hip-hop. - Sucio

*** ill o.g. ***
I focus on getting the drums to sound good. When the drums (foundation) sound good everything else fits in place a lot easier. Having good sounding drums (even in a basic groove) will allow you to hear flows in other elements when youre creating
→ Diy Music Business
→ Video Marketing For Producers

You done fucked up

*** ill o.g. ***
I start with a melody or bassline in my head and make drums to fit. after I finish with the melody if the drums sound robotic I start over with the drums on my keyboard. then go on from there
Follow me: @nycbigtone
http://bodegacoldkutz.com/

loudejmaster said:
im 16 years old from brooklyn ny crown heights baby
i use fruity loops studio and i wanna become the bect producer out so holla at me
Click to expand...

kontents said:
Hey i want to be the bect producer too!!!!
Click to expand...

I got a letter from the the government . The other day.
I opened and read it, it said they was sucka's.
They wanted me for the army or whatevas
Picture me givin a damn i said neva!
Chuck D
V

with i usually start with the kick then add snare hi hats, shakers ect. i save all my mixing (eq, compression, fx) until i get ready to mix the whole beat. i mainly draw my drums in so if it doesnt sound right with the melody i just tweak it until it does
S

*** ill o.g. ***
groove is the most important for me... i do live drums on most of my shit, then use drum agog to replace with my custom drums or steven slate drums... usually a combination of both, though.
Soprano Soundz
Brick Squad Monopoly / 808 Mafia
You must log in or register to reply here. 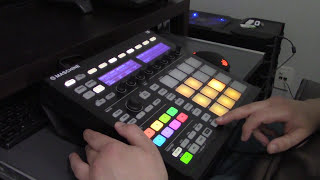