Minimalism is usually looked at as a lifestyle where a person has a mattress on the floor, a small table with a book, and a jar of mustard in the fridge.... or that could be poverty. Nonetheless, being a minimalist is actually something where a person de-clutters their lives by removing unnecessary things, from physical items to relationships.

When it comes to beat making, being a minimalist is not something I've actually ever heard of. Until now. Because that's what I am.

When it comes to my lifestyle, I'm actually a minimalist of sorts:
This may seem foreign to most of you reading this, but that's basically how I've been my entire life. I've never been big on the latest fashions, gadgets, or trends because it just never interested me. I guess it's just something that's been in my DNA since I was born, but those are just "things" to me and serve no value other than a temporary joy of having said things.

I know that most people in this world today are the complete opposite of me:
Having this type of personality has allowed me to become a minimalist in other areas of my life, whether I realize it or not. After lifting weights in the gym over the years, I finally realized one day that I'm a weight lifting minimalist! How? Whereas most people tend to use lots of machines or do popular exercises such as the bench press, I'm always using free weights and for some reason I tend to stay away from the popular exercises. The reason being, that I'm a minimalist.

Making beats brings out the creativity in all of us, and as such we tend to explore different options, from trying various new sounds to see what sounds good, to experimenting with a new plug-in. It's very tempting to play around with new gear or to tweak the settings on an effect, but this deviates us from what we really should be doing, which is beat making.

When I first started making beats it was a simple setup - drum machine, sampler, and a keyboard. I found that I was able to be very creative with this setup but then once I started using a computer-based DAW, things started to change. I quickly noticed that instead of being creative and coming up with new ideas for my beats, instead I found myself tweaking my DAW, which then led me to getting rid of my hardware gear. I ended up working solely within the computer, which is great in theory but it greatly diminished my creativity.

What I have now for my setup is Native Instruments' Maschine. I also run Cakewalk Sonar but I only use it at this point for mixing because I like to have my whole world within Maschine, that's what works for me. When I first got Maschine, I couldn't believe how perfect this box was for me because it fit my workflow and personality perfectly. That is, Maschine is like a minimalist beat making box.

Whichever way I make beats, I always end up keeping everything very simple. It's not that I'm afraid to delve deep into Maschine's settings, or to learn a bunch of new tricks within my Sonar DAW, rather it's just that I can't be bothered. The bottom line is that once I figure out a method that works for me and allows me to make beats within a proper workflow, I just stick with it. I know many people that mess around with their gear until the sun comes up, but most of them don't get things done. They end up spending so much time tweaking that they forgot what they were doing in the first place!

When I'm making beats, I have a simple 4/4 drum pattern, my hi-hats are straightforward, and my basslines follow the kicks. Adding in samples is kept to a minimum as well because I like for my beats to come out sounding clean and not over-processed. If you were to listen to some of my work you would know right away that I like my workflow to be simple.

My theory is that if it works for you, then just do it. Why bother changing your workflow? If you were to think back to when you first started making beats, I'll bet that you had a simple setup and you had tons of ideas. Am I right?

I think it all boils down to the music, regardless of what kind of beats I make or what sort of setup I have, because when I really think about it, even the music I listen to is simple! Sure, I prefer to listen to the 90's "Boom Bap" style of music over anything new, but it's because the production back then was - you guessed it - simple.

Think of all the Rap music coming out back then and compare it to today's stuff - what's the difference? To me it's that today the music is overdone. Over mixed. Too loud. Too complicated. The 90's music was heavy on drums, had samples that weren't complicated, everything was mixed well, and it just sounded good.

So what's the lesson that you can take away from all of this? It's entirely up to you. I'm not saying that you should be a minimalist beat maker, I'm just telling you how things have been for me and how it plays into my everyday life. If you make crazy beats that are complicated and loud, ask yourself if your life is like that. Is it?

I know it may seem stupid to think like that, but from my experience, it makes total sense. I honestly believe that your lifestyle plays a crucial role in what type of beats you make. It might also explain why you're not able to make certain types of beats. Some beat makers try to make a certain style of music but always end up making something totally different. That has happened to me a few times, until I finally realized that I can't make this or that type of beat. Instead I just make whatever comes out and leave it at that. Each time, my beats come out with the same style, which is laid back but with an eeriness and a dash of horror thrown in. And guess what? I lead a laid back lifestyle and I love horror movies. Coincidence?

The more I think about it, the funnier and weirder it gets each time because all of these things tie into one another. From my personal life to making beats, it's all connected. My beats are simple and my lifestyle is simple. I'm a beat making minimalist. What about you?

*** ill o.g. ***
Battle Points: 2
I've always felt like that when making music. I also noticed how when i moved from the city where I lived all my life to the county my whole vibe changed with making beats and writing because my lifestyle changed and atmosphere changed. Great post Fade.
KFBeats.com

Administrator
*** illest o.g. ***
Battle Points: 1
Thanks for the feedback! The entire point of the article was to show that your personality and/or surroundings drastically influence your music, just as you said it.

Battle Points: 168
bthis!
war
aotb!
Doesn't sound stupid at all. You know yourself. Most should be so lucky. Good article.
"I wanted to tell God that I don't deserve this, Was afraid that he'd tell me I deserve less"

Battle Points: 1
Good article. I'm the opposite tho. Very layered and complex. Idk why. When it comes to the final mix and I'm handing files over to the engineer, that's when I'll organize them. Other my workspace will has to be "decoded" lol!
Even with my dirty boom bap joints.
www.mclovinbeatz.com

Fade said:
When I first started making beats it was a simple setup - drum machine, sampler, and a keyboard. I found that I was able to be very creative with this setup but then once I started using a computer-based DAW, things started to change. I quickly noticed that instead of being creative and coming up with new ideas for my beats, instead I found myself tweaking my DAW, which then led me to getting rid of my hardware gear. I ended up working solely within the computer, which is great in theory but it greatly diminished my creativity.
Click to expand...

I couldn't agree more with this comment.. I'm almost strictly hardware based- aside from some mastering and uploading stuff I generally try to avoid working with computers altogether.

Obviously, loads of folks do great work with DAW"s and more power to them but I have no real desire to use one myself at present although this could change over time, of course.

I did use Ableton for a very brief period when I first came back to making beats again after a break but I was basically getting an on the spot crash course in the programme in the studio while recording stuff on a borrowed Roland SP- 303 at weekends on some free studio downtime I managed to blag!

I own a couple of nice analogue 2 channel tape decks from the early 70s which a friend of mine kindly donated to my setup when he sold the majority of his recording gear and studio a while ago.. They also have great sounding valve pre amps built in which I love the sound of.. you just gotta let the things warm up for a little while then you're good to go..

I come from a period in Hip Hop where almost everything was recorded to tape and passed around and this aesthetic has always stuck with me .. you or somebody like minded would buy the record and dub cassette copies for mates to hear and most of the people I knew who were interested in production used drum machines, keyboards and primitive affordable samplers as Fade previously mentioned... my first sampler was the Roland MS 1 which I thought was the greatest thing ever at the time haha although it was more like a toy in comparison when I acquired my first Roland SP-808 a couple of years later.

The bottom line for me is I just really want to enjoy making music with instruments as recording in a live capacity is what I like to do most.. I never feel like this when I track things out in a DAW as nice as the end results can be, sonically.

Admittedly I'm no expert on computer based recording and I may find myself thinking differently somewhere down the road as a couple of my beatmaking buddy's have offered to show me the ropes with Ableton but all my inspiration comes from the instruments I pick up and the recording gear I use on an almost daily basis right now..
Bandcamp | SoundCloud

Battle Points: 285
bthis!
war
bfights!
aotb!
biu!
Looking at this, i find myself evolving constantly. Which is why when i make my style of music ( weird trap ) its not exactly trap because of my influences in house music and synthwave. O have noticed i tend to keep my drumming simple from my 90's beat making with just different drum sounds. I found that boom bap for me personally is not exciting unless we talkig 'blackout' album of meth and Redman. I just love vibey tracks or really unique sounds. Hence i loved the beetnuts as well. Vibey but solid.
https://www.youtube.com/channel/UCXzqJppMygGN4ujZ2_2ajSA
You must log in or register to reply here.
Share:
Facebook Twitter Reddit WhatsApp Email Share Link 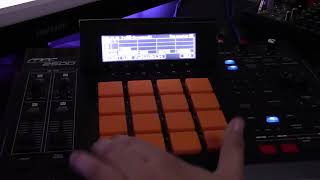