Sampling from vinyl is a common practice amongst Hip Hop producers, going all the way back to the early days of beat creation. Going digging at the local record store and finding that hidden gem is what many have done countless times, which has led to a slew of well known tracks and certified hits.

However, like almost everything today, technology has slowly pushed vinyl digging to the side and has ushered in a new way to make beats with sampling coming from MP3s.

I'm a big fan of vinyl records. I've been deejaying since the 1990's and to this day I still regularly get on the 1's and 2's and cut it up. I also enjoy digging through vinyl, trying to find a dope sample I can use on my next beat.

There are many ways that you can find a sample to use in your tracks, but to me, vinyl is the best. When listening to a record, I find it's so easy to come across samples that I wouldn't normally of found if I were taking it from another source. Plus, the whole “vinyl sound” that a lot of people love plays a huge part, especially when it comes to Hip Hop beats.

What's great too is that often times I'll find a sample full of hiss and dirt - but that's perfect for Hip Hop, so I use it (unless it's really badly damaged).

Regardless though, using vinyl as a medium to find sounds is also a great way to discover new music. There have been plenty of times when I was listening to a record and then I found myself actually like the whole album. The same cannot be said if you're listening to something else like a CD or an MP3 because it's too easy to skip to the next track.

YouTube. Plain and simple, it's the way to go. Everyone today at one point or another has gone on YouTube and found a song that had some dope samples in it and they used it. Why not? It's there and it's convenient.

Is it cheating? Hell no. Some may argue that it is, or that the sound quality is subpar when compared to vinyl, but it's a sound source just like anything else.

Just recently I saw a video of Havoc making beats in the studio and I noticed that he had his browser open to YouTube!


Who says you have to sample only from vinyl? Just because that's how it was done amongst Hip Hop producers for years, doesn't mean everyone today has to still do it like that. If a person were to think that, then that's the same as saying that anyone using Maschine or FL Studio to make beats is not right, and that everyone should still use an Akai S950 and an E-MU SP1200. Those machines were great back then, today they're archaic.

When it comes to sampling, it's all about finding dope sounds, period. Nobody ever said that sampling HAS to be done a certain way. You can even just walk around your neighborhood with a recorder and just sample sounds from the street! Everything is fair game.

Even though I'm a fan of sampling from vinyl, I find myself sampling more now from YouTube out of sheer convenience. Often times I still go digging and I look at certain records that could be good for sampling but then I always ask myself if I should spend a few dollars or just look up that same record on YouTube.

Most of the time I end up saving my money.

Vinyl is not evil, not at all. I still like to collect certain records, but for sampling it's a whole different scenario.

What happened over the years is that most Hip Hop producers got into the mindset that you have to sample only from vinyl because that's what everyone else did. But what those people fail to realize is that back then, that was the main source of music for producers. Now, it's YouTube.

Is it wrong? Nope.

So where does that leave us?

I like to use both mediums. Vinyl is great and I still love the fact that I never know what I'm going to find when I put the needle to the wax.

YouTube is great too because pretty much every song ever recorded is on there (someone should confirm that!).

Whichever way you prefer to sample, stick with what you're comfortable with, as it's all about making beats. If that means you use something old, new, or in between, it doesn't matter - just make sure your beats are dope.

Battle Points: 93
aotb!
biu!
I used to use vinyl but YouTube is the way yo go now.

Battle Points: 5
Something about sitting at a computer to find music, as well as using software (although i use it for mixing) just destroys the whole creative vibe and almost doesn't feel real to me, unlike physically holding and playing a record or tapping away on an MPC, playing hardware synths etc. But i agree there is soo much music online for the taking haha, depends on what works for you

*** ill o.g. ***
My whole record/vinyl collection just got stolen, 1000+ Might be able to get them back, lost some gear as well. Fuck Friends
"How do you measure success"

eldiablo said:
My whole record/vinyl collection just got stolen, 1000+ Might be able to get them back, lost some gear as well. Fuck Friends
Click to expand...

Great Article. I agree 100%! Unlike most people, I started sampling from online sources and then tried vinyl. I do prefer the creative process implied with going out to cratedig and listening to the music while looking at the sleeve. It inspires me and keeps me focused. But I would never say that the final product is any different because it is vinyl instead of youtube...

Slim but the beat is fat.

I like both mediums. I disagree that every song recorded is on you tube... lots are though.
One thing for sure is that Sampling is NOT dead.
Whether you decide to use vinyl, you tube, or a digital collection, there is art to be made and enjoyed.

eldiablo said:
My whole record/vinyl collection just got stolen, 1000+ Might be able to get them back, lost some gear as well. Fuck Friends
Click to expand...

they sound like some asshole "friends". hopefully you can surround yourself with nicer people

Good article man. I do think getting material from blogs is really the best option if getting hold of records is not a viable option. This is pretty much how I get all of my samples these days and many times I find an old song that I like and send someone else the youtube link so they can check out the song and even the drop in sound quality between an mp3 with 320 bitrate compared to the compressed youtube clip is really noticeable, especially with soul and funk stuff. Still in saying that, if you know how to use EQing to your advantage you can still get the mp3 sounding pretty nice and clean, especially if you combine it with better quality sounds. Finding stuff from blogs can be time consuming and takes some good research skills to track down the gold so can see why a lot of producers today settle for youtube. I live in New Zealand and only have one record store in my city which sells records for outrageous prices and on top of that their selection is extremely limited and restricted mainly to popular vinyls rather than obscure stuff so its not even an option for me. Yeah, if I travel to a foreign country like Brazil, Italy, Russia, Germany ect. in the future then I will definitely go vinyl digging but you gotta' work with what you have. This is what hip hop has always been about. I have never heard any producer I respect say that you HAVE to use vinyls and HAVE to use analog equipment. They seem to not really care too much about this type of stuff. Having an ear for whats dope and what not is far more important! Its the guys online that go to extremes with technical issues that make up all these weird rules. Apollo Brown still uses Cool Edit Pro and Madlib mentions in some interview how he will use youtube files if he can't find the record or a better source and also talks about making some beats on his phone! The most important aspect of making beats is finding dope samples. Period.
Last edited: Feb 10, 2019
You must log in or register to reply here. 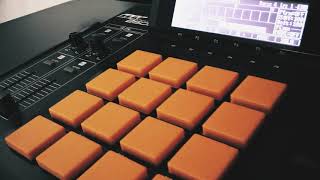