Production 5 Reasons Why You Should Totally Make Beats

After my previous article, "5 Reasons Why You Should Never Make Beats", I gave a rundown of why you should never make beats and that it can actually result in broken bones and/or death. For those of you that were too scared by the article and want something more uplifting, well then I'm here to tell you that there are five reasons why you should totally make beats.

Hip Hop used to be fun, and even though most of today's music is a complete mess, there's no reason why you can't have fun making beats. Forget playing video games or "surfing the net" (do people still say that?), instead you should totally make beats. Based upon the most recent study* that was done at a top university in the world**, making beats is good for your brain.

Studyologists had four monkeys run through a maze, then watched in awe as the monkeys made a four-bar drum loop in Reason. The monkeys then had their brainwaves measured and the results were staggering. Three of the four monkeys showed significant improvement in the area of the brain that pleasure comes from. The other monkey was just stupid and was still trying to log onto Windows.

2. You Can Make Money

Yes, money can be made from making beats, and lots of it. In order to make some good money from your music, you have to be good, and you have to hustle. Networking is very important, and the more people you connect with, the higher your chances of getting that loot.

The problem with making money from your beats is that you'll lose the original "drive" and "hunger" that you once had, before you made money. This will result in you making terrible beats, and you will lose your fan base. The good thing about it is that you will make even more money than ever before because your music will sound just like everyone else's - shit. People love that style.

I know, you're probably wondering why I could even mention that you can ever be bored. The world today is filled with people that have no time whatsoever to do anything at all because they're busy 24/7. Even when sleeping, people have their cell phone clutched in their hands.

Let's face the facts though - you're bored. If you weren't bored and didn't have lots of time to play with, then you wouldn't have time to watch TV for 3 hours each night, or "surf the net" all day while eating Doritos. By making beats, you will instantly cure your boredom and you will not even see the time fly by.

Have you ever had a major finger drumming session on the 16 pads of your MPC? What about spending hours working on that difficult piano or synth pattern on your keyboard? All of that practicing will eventually strengthen your finger bones and that will help you in the bedroom (or the bathroom, parking lot, escalator, book shelf - wherever you have sex).

It's no secret that women love the finger. Even the biggest dweeb on the planet with no sex experience whatsoever can please a woman with his fingers, so having strong finger bones will help greatly in this area. Doctors at the Mayo Clinic*** recommend that the average male practice various finger banging exercises daily, in order to strengthen the core muscles needed for finger sex.

5. You Will Save The World

Music is heard throughout the world. Even with all the conflicts across the globe, the one thing that could possibly bring everyone together is - you guessed it - your music. I once saw a movie based on a true story where two groups of soldiers were fighting one another, then all of a sudden a child in the distance was heard with his MPC. The soldiers then dropped their weapons momentarily to listen to the beat this kid was making. All the soldiers died right after, but the point is that the music spoke to them.

*No studies were actually done.

**The university is actually in a third world country.

***Not actually the Mayo Clinic.

****Note: This article was meant as a joke. If you didn't laugh then run into a wall.

Lmao this article is hilarious! Monkeys making loops and all the asterisks and MPC fingers (I've tested this theory, works great) aha. Awesome.

Administrator
*** illest o.g. ***
Battle Points: 1
LOL, thanks for the feedback! 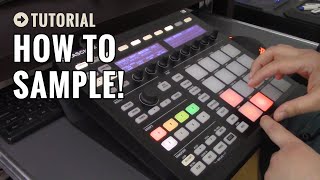